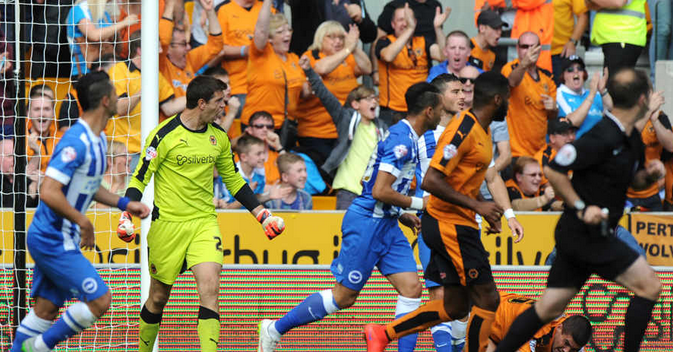 But this result, coming off the back of the hugely dispiriting trip to Bolton, felt like a turning point of sorts for Kenny Jackett’s team of fledglings.

Brighton’s excellent start to the season indicated a challenge lay ahead and the visitors made a lively start.

Sheyi Ojo offered little defensive support to Scott Golbourne and our left back struggled as a result, tripping Jamie Murphy to concede our third penalty in just seven Championship fixtures.

Thankfully, Emi Martinez’s horror show against QPR is beginning to look like a one off occurrence. The man on loan from Arsenal began a man-of-the-match display by saving both Tomer Hemed’s spot kick and the subsequent follow-up.

The decision to axe Carl Ikeme is one that has been discussed plenty enough but the performance of his successor today suggested that their may be some method to Kenny’s perceived madness.

From that point on we more than matched Chris Hughton’s table toppers and looked more likely to break the deadlock prior to the halftime whistle.

Dominic Iorfa enjoyed his restoration to the team and was arguably our biggest threat, regularly jinxing past the brilliantly named Gaetan Bong.

Dreams of an opening goal were soon quashed by Connor Coady’s red card, brought about by an arguably reckless lunge on Elvis Manu.

My initial reaction was that Jerry Simpson’s call had been harsh but, having considered the matter in a calmer environment, now feel that he was within his rights to give the Liverpudlian his marching orders.

Going in with your studs showing always invites trouble and Coady should have known better.

The sending off lay a huge gauntlet but was responded to in emphatic style. Every man put in a gargantuan shift and gave a timely reminder to all in attendance that there is plenty of spirit in this team, something that will no doubt delight our manager.

Kortney Hause gave his most assured performance to date and has probably done enough to be given the chance to strike up a partnership with Danny Batth once the skipper makes his eagerly anticipated return to the starting eleven.

None of this is to say that the fears brought about by our stuttering start to the season are now invalid. Our midfield is bypassed far too often and is running the risk of edging Afobe towards the exit door by failing to create regular chances for him.

Resolving the contractual impasse with Kevin McDonald is a matter of real urgency because he remains our most creative outlet. The continued omission of Rajiv van La Parra is also beginning to look questionable, given the underwhelming form of our other wide men.

This spirited display against a very capable Brighton team offers plenty of encouragement but doesn’t quite go as far to suggest that a surge up the league table is imminent.

Hope remains that Kenny will use the loan market to good effect but the mooted signing of Shola Ameobi suggests that future arrivals at Molineux may be of a more modest nature than most would like.

Still, as Johnny Mercer one said, you’ve got to Ac-Cent-Tchu-Ate the Positive.