If Troy Deeney’s equaliser proves the difference between success and failure in the hunt for a top six finish, Kenny Jackett will be tremendously disappointed. 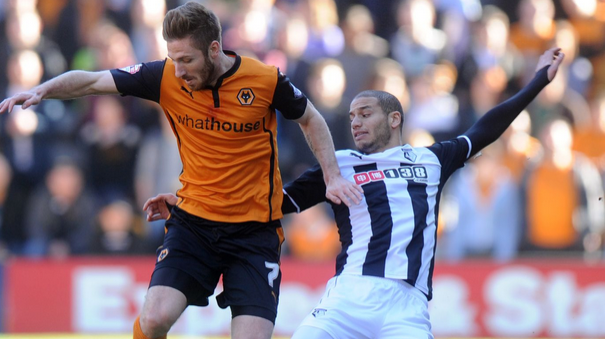 Having twice maneuvered themselves into a winning position against a good Watford outfit, Wolves were twice caught out by routine balls over the top.

Matej Vydra’s smart finish was more palatable given that it capped a swift counter attack and the forward’s pace took him away from the challenges.

But the long old hoof that dissected Batth and Stearman and allowed Deeney to tie things up again in a feisty second half was simply poor defending.

On the balance of play, a draw was a fair reflection of proceedings, with Wolves in the ascendancy for much of the first half and the visitors enjoying the better of the second.

Benik Afobe personified the performance of his team, starting off strongly but then fading after the break when starved of supply.

The former Arsenal man must be frustrated that two excellent goals in two games have only yielded a single point.

Unerring would be an apt description of Afobe’s seventh goal for the club in just 11 appearances. Will he still be around next season if Wolves can only offer second tier football?

Kevin McDonald is another who can feel pretty satisfied with his efforts of late. If Afobe’s two finishes yesterday and in midweek were good, the passes that teed them up were sublime.

There can be no denying the Scot plays his best football when teamed with the steady and reassuring presence of Jack Price.

Speaking of the bearded one, I’m sure when he dreamed about his first senior goal he didn’t envisage a shot deflecting in off his rear end.

But I think he deserved that good fortune for another mature performance. Simple passes, key interceptions and positional awareness aren’t glamorous but they’re important.

He also cut down Fernando Forestieri in the dying seconds as the forward charged towards goal looking to win the game moments after conning the referee into dismissing Bakary Sako.

The Italian decided to act like he’d been shot in the face after being pushed in the chest. One would hope that has a chance of being overturned.

Losing Sako for 30% of the remaining games would be a major blow despite a low key performance yesterday.

Anything and everything seemed to go through van La Parra, who continues to excite and frustrate in equal measure. But there’s no doubting his ability.

Like the mercurial winger, Wolves need to take all the positive attributes they possess and hone them into consistency.

With difficult fixtures and intense competition for places, even that might not quite be enough.

If you’ll forgive the self-indulgence this is actually the 1,000th blog in the history of the site, which is something Ben and I celebrated with a few post-match pints yesterday. With over 57,000 comments in that time, it’s clear there’s much more happening than just our posts, so this is another opportunity to say a massive thanks to everyone. Here’s to 1,000 more.