You are here: Home / Blog / Crystal Palace Vs Wolves Preview

Wolves were ticking along nicely until Crystal Palace arrived at Molineux back in October.

We even went a goal up in that game, but two magic moments from Wilfried Zaha and a nasty injury to S?awomir Peszko derailed our progress.

We’ve only won 4 of 16 games since, while Palace, despite changing managers, continued on a run that would see them reach the summit of the Championship table.

Unfortunately for the Eagles, they’ve stuttered in December and fallen back into the play-off places. Without a win in their last 5 matches, they need to pickup again sooner rather than later if they’re serious about challenging the top two.

A home game against Wolves is an excellent chance to do just that. Their home remains strong as you’d expect for a team occupying 4th place – 7 wins, 4 draws and just the one defeat thus far.

While Zaha might be the threat that most supporters fear, it’s Glenn Murray stealing all the headlines. He’s the Championship’s leading scorer with a phenomenal return of 22 league goals already. To put that into perspective, the entire Wolves squad have only managed 31.

As they were the last time they suffered back-to-back home defeats against Forest and Millwall, Wolves are a mess.

After those catastrophic performances, we buried a poor Bristol City side to herald the mother of false dawns. But what now? I can’t imagine for a moment that Palace will be anywhere near as generous.

The best we can realistically hope for is a shrewder tactical approach, a better defensive display and a result of some description. This would be the team I’d send out: 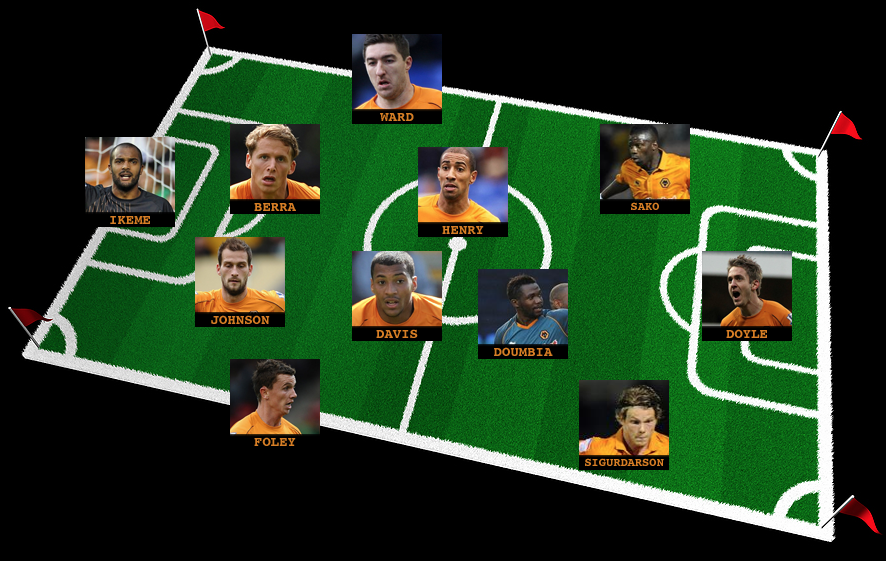 So, drop one of the forwards (probably SEB) in favour of bringing in an additional midfielder. Solbakken has been reluctant to stray from his preferred 442, but surely now is the time?

Admittedly, I was advocating similar change prior to the game at Ashton Gate and he made a mockery of that idea, but Selhurst Park represents a much tougher challenge.

I’d love to be proved wrong again, but I truly believe if we don’t get a foot on the ball and control the play, we’ll be taken apart.

The defence has taken a pounding (and rightly so), but our crippling inadequacy going forward is really putting us on the back foot. Teams know they can just sit back and wait to pounce. Until we get some creativity into the side, this will continue to be the case, particularly at home.

In stark contrast to the Peterborough game, the majority thought we’d get turned over by Mick.

26 people correctly thought we’d lose and of those, 8 got the correct scoreline too.

Well done to Alf White, Slider, Rob in London, Twixfix, johnok, Tettenhall Wolf, Bagsy and Wolfman Steve for doubling up. A single point for everyone else.

It’s difficult not to arrive at the logical conclusion of another defeat, even taking into account Palace’s recent struggles.

That said, we haven’t drawn away from Molineux yet, so hopefully we can stink the place out with an attritional, stubborn show of defiance.

HAPPY NEW YEAR! MAY 2013 BRING YOU ALL GOOD THINGS (STARTING WITH A BETTER FOOTBALL TEAM HOPEFULLY)