You are here: Home / Blog / Wolves Vs Crystal Palace Preview

Much like their opponents tomorrow night, Crystal Palace come into this game in great form.

After losing their first 3 league games of the season, the Eagles strung together a run of 4 wins from the next 5, including a last gasp victory over Bolton at the weekend.

In Wilfried Zaha they have one of best young talents in the league and nullifying his threat will be vital if Wolves are to make it 5 league wins on the spin.

Striker Glenn Murray is also in fantastic form with 6 goals already. His confidence is sure to be sky high, which makes him a danger.

We know their manager very well of course. I always thought Dougie Freedman was a fantastic player for Wolves and definitely one who left before he should have done. Nice to see him doing well for the club he spent the majority of his playing career with.

If there was a negative to come from Saturday it was the injuries we accrued. Boukari has been ruled out for several weeks, there are reports Ward won’t make it back in time and of course poor old George is out for the season. Get well soon big man.

I just wonder whether Ståle will contemplate rotation as he did at Portman Road a few backs? Either way, this would be the team I’d put out assuming Ward is injured: 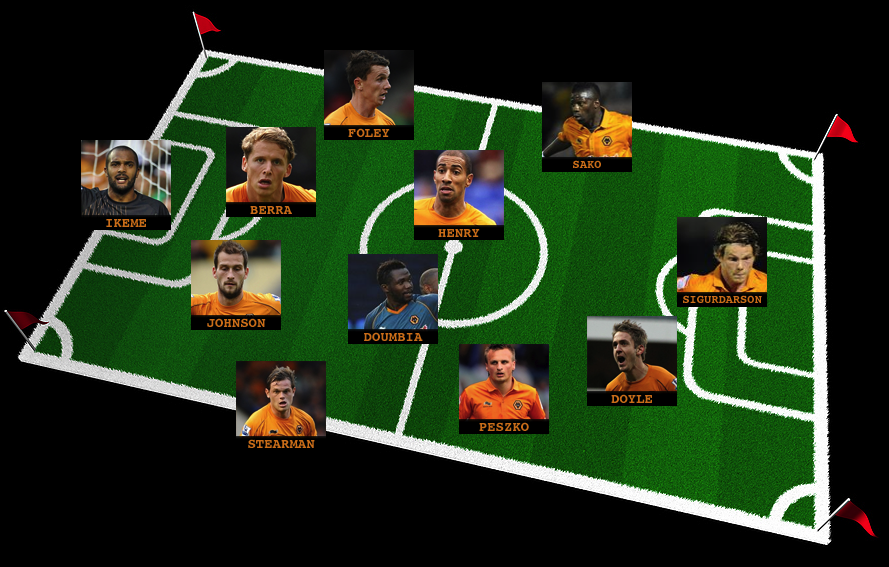 As you can see, not much rotation in my XI, with only the enforced changes and Sigurdarson added to the team.

Moving Foley across to the left and bringing in Stearman/Zubar at right-back is a no-brainer. We don’t have many other options.

Sigurdarson is probably worth a first start at Molineux to give Ebanks-Blake a rest, so I’d give him a crack.

The only other player I can see coming in would be Dave Edwards and he can be deployed pretty much anywhere across the midfield. It wouldn’t surprise me to see his name on the team sheet.

Thanks to Palace fan Andy Watkins for sending me the following:

After a fairly hap-hazard start to the season, Dougie Freedman’s re-jigged Palace side is starting to take shape. After key departures in the summer by the likes of Nathaniel Clyne, Anthony Gardner and Darren Ambrose left us somewhat bereft of quality heading into the new season, a combination of shrewd signings to plug holes at the back and the welcome return to goalscoring form of Glenn Murray has renewed optimism around Selhurst Park. It’s still very much a case of work in progress but four wins from five outings in September mean Palace should be full of confidence ahead of Tuesday night.

Wolves appear a bit of an unknown quantity after relegation but they’re one of the title favourites for a reason. It’s no great surprise, especially under a new manager, they needed a few games to readjust to life back in the Championship but they too seem to be coming into form again now.

Palace are not to be underestimated, though, as Bolton and Cardiff have found out to their detriment in the past week, and there’s no reason why we can’t keep our recent purple-patch going. Successive wins on the road might be too much to ask but, for as long as this new-found optimism lasts, a repeat result of our last trip to Molineux (2-2 in the FA Cup three seasons ago) might yet be a realistic shout. Unfortunately, for Palace fans at least, it doesn’t look like we’ll have Danny Butterfield to call upon in the reverse fixture this time around …

Well done to the 52 who correctly predicted we’d win on Saturday.

Only 3 pundits got the correct scoreline though, so it’s hats off to Louie, These are the days and dave h.

Until the run ends, I can’t predict anything other than a win.

I saw nothing on Saturday to make me believe we’ll struggle in this one and if we can nudge ourselves into the lead again, I think we’ll get another 3 points.