You are here: Home / Blog / Wolves Vs Chelsea Preview

The thing that disappointed me most about the Cardiff defeat was that we played into their hands.

We sat too deep, rarely put a foot on the ball and forced far too many long, aimless passes forward. In doing all that it made for a slippery, end to end contest that they were much better equipped to contest.

To my mind, the defence should have played 15 yards further up the pitch and the emphasis should have been on retaining possession and strangling the game.

We’ve got to pass the ball better than we have done in the last two matches, even if teams are pressing. That’s the difference between an average team and a good team.

The Blues have only lost once in 14 Premier League games so far. It’s hard to see how Maurizio Sarri could have done much better given how long Chelsea farted around getting rid of Conte in the summer, which limited his pre-season.

They have the league’s outstanding player in Eden Hazard and their squad remains strong even if it’s yet to be truly moulded in their manager’s image.

Alonso, Azpilicueta and Kante are three players that would surely get into any team in the league? Summer signings Jorginho and Kovacic give them a more forward thinking midfield and the team looks more dynamic than the Conte days.

I feel like they’re a player short at both ends of the pitch to be truly competitive with Liverpool and Man City, but would be surprised if they weren’t in the top four come season’s end.

With the champions to come on Saturday at Stamford Bridge they may rotate some of the better players out tomorrow, which hopefully enhances our prospects.

Some random comments from the match thread on a leading Chelsea forum.

Adama Traore going up against Alonso and David Luiz is their biggest threat. Both will likely start and need to play a lot better than they have been doing for most of the season so far.

Wolves will enjoy this game lot more than playing against Cardiff and Huddsfield. Fortunately they aren’t in good form and not having a prolific striker, think it’s the right time to play them. Got win this game, I’m not confident about our chances against City on the weekend.

Looking at the results above it certainly is a tricky one. They’re due a win and it looks like they’re suited to playing the better sides, especially as you can add a draw with City to those results against Spurs and Arsenal. Possibly not the time to be resting players. You could even argue a case where we’d be better off resting players against City.

Who plays in midfield? Dendoncker, Saiss and Gibbs-White are the contenders. Restoring Bennett to the back three and playing Saiss alongside Moutinho is probably the most likely scenario but all have a chance. 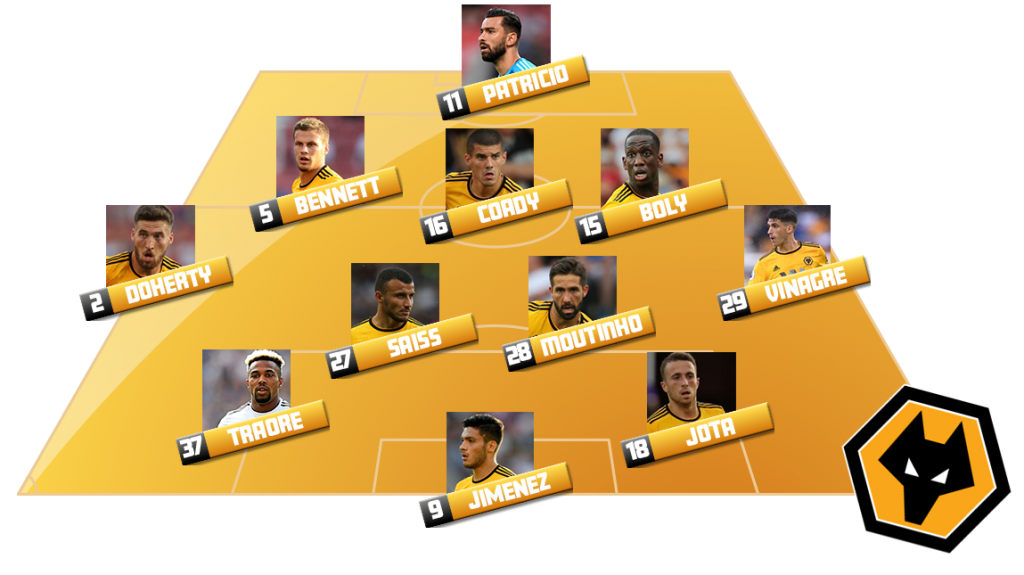 Costa must surely get the hook after back-to-back shockers? I would persist with Traore and bring Jota into the team. If not him, then definitely Cav.

I think any calls for Rui Patricio to be dropped are drastically premature. He’s been top class despite a few wobbles of late.

Whoever plays, we’ve got to keep the ball better than we have done of late or there’s zero chance of getting a result.

I was correct to be pessimistic about the Cardiff game and well done to anyone else who also predicted doom in Wales. vicsmith still leads the way in the Prediction League table.

To join in, simply leave your prediction in the comment section below, which is where you’ll see my best guess.