You are here: Home / Blog / Crystal Palace Vs Wolves Preview

I think the most impressive quality this Wolves team possess is consistency of performance.

Southampton were the first side since Everton on the opening day to really disrupt their rhythm but it says a lot that 4 points were still extracted from those games.

They set their stall out and play the same every week regardless of the opposition. But when they need to dig deeper, they have the knack of finding a bit extra to get over the line. Those tandem qualities are the mark of a top side.

You’re never far from your next defeat in the Premier League so to have only suffered once in seven (in a match we probably shouldn’t have lost I might add) is mightily impressive.

Only the undefeated top three have lost on fewer occasions.

I’m never confident about a trip to Selhurst Park, despite the fact we’ve enjoyed our share of success over the years. It probably has something to do with that scarring play-off defeat in 97.

Growing up Palace always felt like the pinnacle of pacy, direct football. The type of team that scared the snot out of you and routinely beat Wolves to promotion for nearly two decades.

I look at their team now and I see similar devilment. Ayew, Townsend and most obviously Zaha are all of that ilk; players who can turn the game on their own.

They’ve had an indifferent start to the season (although it’s dreamland compared to their first 7 last year) collecting a few useful away wins at Fulham and Huddersfield, but failing to record a maximum at home, despite favourable opportunities against Newcastle and Southampton.

Bournemouth beat them with a late penalty on Monday night so they’ll be keen to right some wrongs come the weekend.

Like Wolves they don’t score or concede big numbers, so the smart money is on a low scoring encounter (prepare for egg on face).

I lifted the following from a match prediction thread on a popular Crystal Palace forum:

High flying, baying Wolves will prove a stern challenge. Think we will be happy with a point in a 1-1 draw.

A game we CAN’T lose! My Mrs and her son are Wolves and if they beat us I won’t hear the end of it. 1-1 and I’d be happy with a point. We’ve been awful lately so can’t see us winning.

I can see this one playing out like the Southampton game so 2 nil wolves.

Until we sign a striker we will lose a lot more games than we win wolves are a very good side and their confidence is high theirs no way they won’t score.

If we lose, this will be 4 home games without a win and I suspect alarm bells will be ringing amongst our supporters. Only Arsenal,Chelsea, Tottenham and Man Utd to come after Everton away !. Early season optimism appears to be evaporating and a defeat by Wolves will cause a great deal of concern.

With four games to come against top six sides,if Wolves eat us alive,our early season optimism will lie in tatters, relying once again on the equally poorly performing teams below us to help us out of a hole we have dug for ourselves.

We need to not lose this one, but I suspect we will. In the circumstances, a draw would be a great result.

I’m putting Traore in the team this weekend, just because I’m tired of seeing the same graphic. 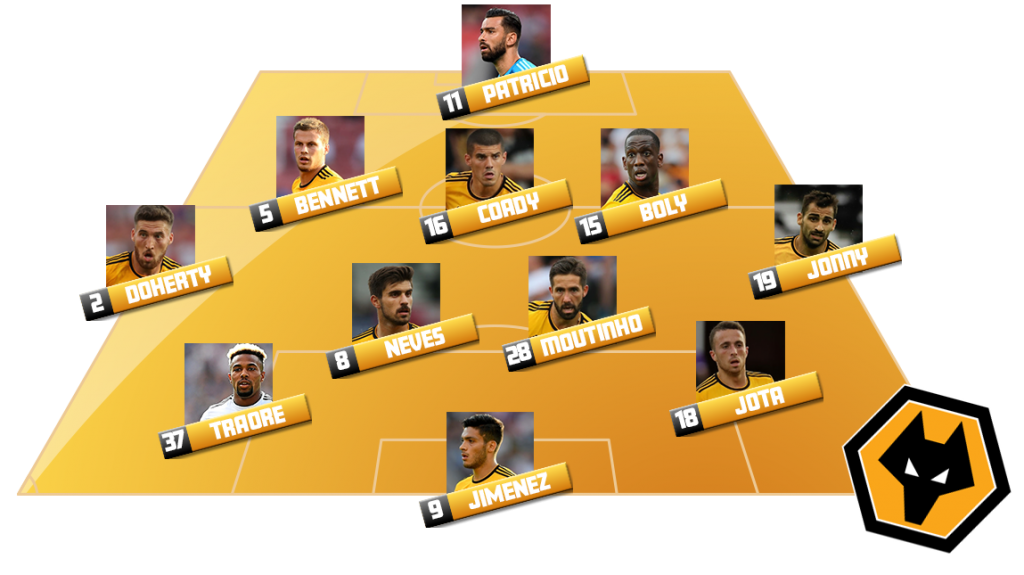 I think I’m right in saying Wolves will break the record for picking the same team in consecutive Premier League matches if we’re unchanged for the 8th game running.

And Costa probably will play, which I’m certainly not upset about. We look more balanced and controlled with him in the side, with Traore bringing the chaos when required.

It’s great to have Cavaleiro in reserve too with plenty of choice across the front line if Nuno needs to change the dynamic of the game – as he did against Southampton.

Much will come down to how well we can contain their attack and Zaha in particular. Balls down that corridor between the back three and wingbacks could be problematic. We don’t want him in those pockets of space in and around the penalty area.

Well done to vicsmith who has the outright lead in the Prediction League table at the end of Gameweek 7.

I would say this is the toughest season in the history of the competition to accrue points, with seemingly any result possible in any game so hats off to those of you in the upper echelons.

I’ve had a few people contact me since the start of the season asking me to review their scores as they feel the table doesn’t accurately display their tally. In every instance it’s been down to incorrect input, either not putting the scores in the stipulated boxes or maintaining a consistent email address for all predictions.

I’m happy to try and correct these issues manually, but please, please, please take care when entering the info as it saves me the admin.

As always, if you’d like to join in, you can do so by entering your prediction for the game in the comment section below, which is where you’ll read my forecast.