You are here: Home / Blog / West Ham Vs Wolves Preview

Even though Wolves are currently averaging less than a point a game there’s still a good feeling about our immediate prospects.

But that will soon evaporate if we don’t collect a victory or two in September.

With home fixtures against Burnley and Southampton and a chance to pile on the pressure at the London Stadium on Saturday, promising performances have to be turned into meaningful results.

Heading into the international break we could find ourselves in the bottom three or in the top half. It’s early days of course, but I know where I’d rather be.

The Hammers are the only side yet to collect a single point, but given that they’ve had to play Liverpool and Arsenal away that’s no great surprise.

Losing at home to Bournemouth raised a few eyebrows though, particularly after taking the lead so there feels like a lot of pressure on them to get a result on Saturday even at this embryonic stage of the season.

Manuel Pellegrini is an astute appointment and with nine new players added at a cost of around £100 million in the summer you’d expect they’ll eventually get it right.

£36 million record signing Felipe Anderson is expected to provide the creative spark and both he and talisman Marko Arnautovi? looked dangerous in the defeat at The Emirates last time out.

Without question though there’s a period of adjustment for any squad when so many new faces are added, so playing them early in the season definitely feels like a plus.

Thanks to Jeff from West Ham Til I Die for offering the following thoughts ahead of the game:

1. Nightmare start to the season for West Ham with three defeats, but have the performances been as bad as the results?
West Ham have given up more points than anyone at Anfield over the years, so we didn’t really expect anything from that game. The Bournemouth game was an horrendous performance, but we did actually look OK, especially in the first half, against Arsenal despite the final result.

2. You must have been excited by the summer recruitment? Are any of the new boys already looking integral?
Felipe Anderson has impressed so far, and looks to be the real deal: skilful and hardworking, lets hope he continues to progress. Issa Diop looks to be a good buy for the future in defence. My Fulham supporting neighbour assures me that Ryan Fredericks is a good player, and he has impressed going forward.

3. It’s been a volatile couple of years with the stadium move and a couple of managers coming and going. Do you get the sense things are starting to settle down a bit now?
I hope so, Pellegrini is a bold appointment by the West Ham board, and he has been given the money to boot. As ever though we will have to wait and see.

4. What’s your view of Wolves? Do you think they have what it takes to be competitive in the Premier League? Have any players particularly impressed you so far?
Wolves are an attacking team, and that seems to be the template for success at the moment. The first season back in the Premier League is always a tough one, but last year all three teams stayed up, so you’re got a good chance. Ruben Neves looks to be a bright prospect.

5. What do you think the general view is of Hammers fans going into this game? Do you expect to win because it’s a newly promoted side or is it seen as a more dangerous looking fixture because of our summer recruitment?
West Ham fans will all be hoping that we can get our 1st win of the League season, and yes you always hope to beat the newcomers. Beating 10 man Wimbledon will have given the players a boost. However we are susceptible to let in an early goal, and you do have a couple of nippy players that could get through our as yet established defence.

6. How do you see the game playing out and what’s your prediction for the score?
Having said all that, I’m hoping we will get an early goal, and will go on to win 3 – 1. Said with absolutely no confidence whatsoever.

Although several players stated their case for inclusion in the win over Sheffield Wednesday I’m predicting an unchanged lineup from the Man City game. 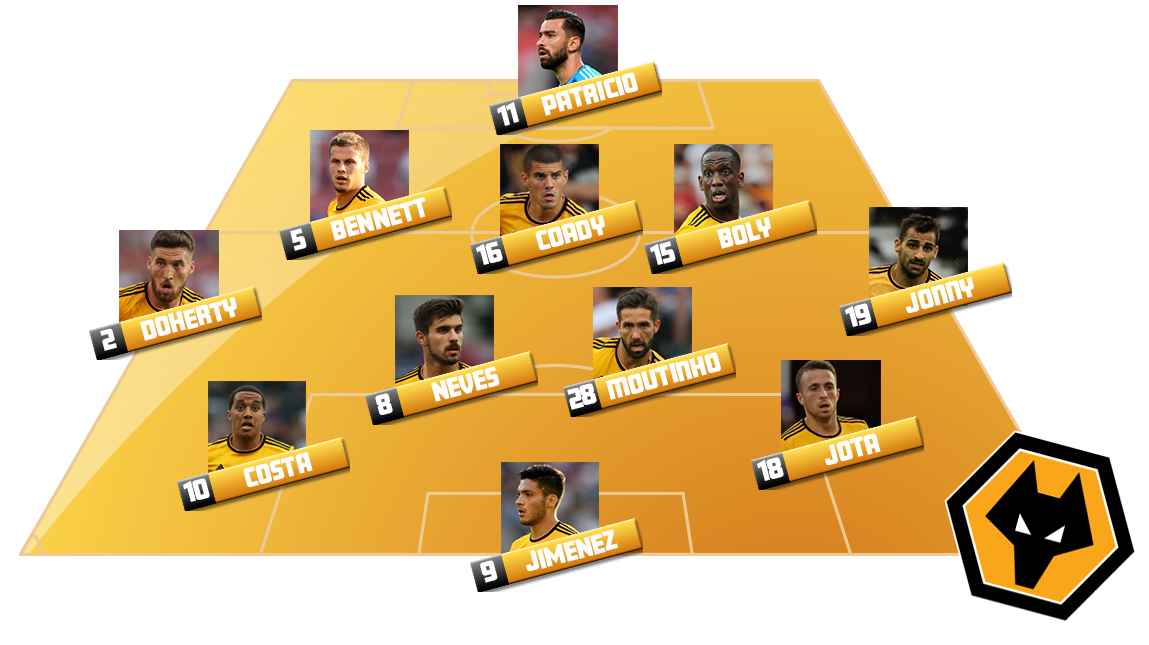 Adama Traore will be given a start at some stage, but I think that might be the home game against Burnley when there will be more impetus on the side to create rather than counter.

I also reckon Ruben Vinagre isn’t too far off getting a game. He impressed at Hillsborough and I can see Jonny moving over to the right and the Portuguese man slotting in down the left. Matt Doherty hasn’t had the best start to the season and looks vulnerable to the cop.

Dendoncker might make the bench after getting a full game in his legs midweek, possibly at the expense of Kortney Hause.

Hats off to Dr. Phil who sits at the top of the Prediction League Table at the end of Gameweek 3. He has 5 points, as do Ash K, LukeW, PeteRobbo, Shready and The Brierley Bonkers, but edges ahead as having amassed his total from just 2 predictions.

A hearty pat on the back for the merry band of losers who’ve yet to score a single point from three matches so far, including me.

There’s still time to join in and race up that table, so make your prediction below if you’d like to get involved.