You are here: Home / Blog / Wolves Vs Everton Preview

Given what we continue to see off the field, my hopes and expectations on it remain comparatively modest.

I just want to enjoy a solid Premier League season, ruffle a few feathers along the way and not spend the whole time burdened by the spectre of relegation.

The 15th place finish under Mick McCarthy is the best we’ve seen from a Wolves side in over 35 years, but now, surely, is the time to be aiming higher.

As others have commented – if not now, when?

An already capable squad has been significantly upgraded with some high calibre additions, everyone’s up to speed and life feels good.

Marco Silva has a lot to prove at Goodison Park. Everton’s much hyped coach has a valiant relegation at Hull and mixed results at Watford on a questionable Premier League CV.

This is his make or break opportunity to shape one of the country’s most famous old clubs in his image and get them challenging the top six once more.

The mega-bucks signing of Richarlison from Watford raised a few eyebrows but he’s looked sharp in pre-season and is likely to pose a serious threat on Saturday.

Despite his capture, heading into the last day of the transfer window there was the sense they still needed to do serious business and that’s exactly what happened.

As I write this giant defender Yerry Mina and midfielder Andre Gomes have both arrived from Barcelona (subject to confirmation), following hot on the footsteps of left-back Lucas Digne.

The only good point from a Wolves perspective is all these quality new additions won’t have long to get bedded in before Saturday.

Views from the opposition

Lifted from a popular Everton forum:

I’ll take a draw as a lot of our new signings won’t be playing.

Don’t buy in to the hype about this lot, although I fully expect them to get off to a great start when we turn up there as winning away against sides we should/will finish ahead of doesn’t happen regularly.

Impossible to predict but Wolves have bought well and this will NOT be easy. I would take a draw right now.

People so negative, We can do over these lot easily. 3-1 us, Don’t expect Mina/Bernard/Gomes to be involved either.

2-1 Wolves is my thinking at the moment. Going to take a bit for these new signings to become familiar with the squad.

Having been at the Villarreal game last weekend, I felt reasonably confident that this is the lineup we’ll be seeing (I don’t know the squad numbers yet so I’m guessing). 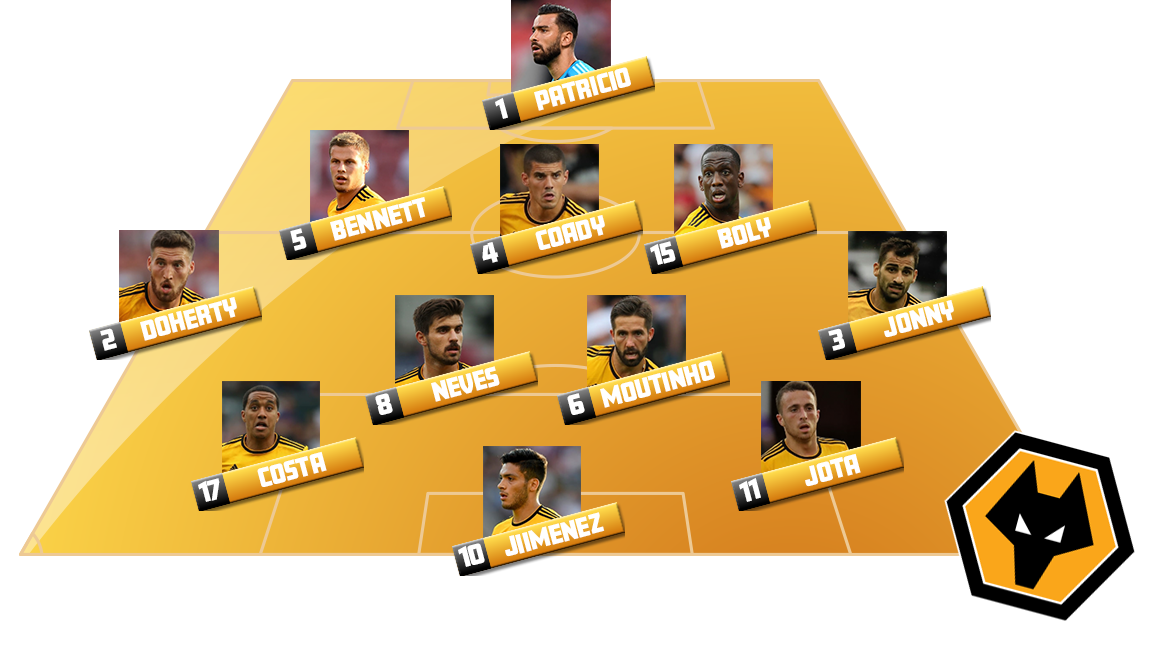 Jimenez got his goal and did little wrong so must be destined to start ahead of Bonatini.

It’s either Saiss or Bennett in the back three and Wolves looked more compact in the second half when the latter was in the team, so he’s probably going to get the nod.

I believe record signing Adama Traore is still out injured, but fellow new signing Leander Dendoncker will probably be on the bench.

When you consider the only players involved last season who’ve moved on are Douglas, Afobe and N’Diaye and six players of (hopefully) superior quality have come in, it’s difficult to feel too disappointed by the club’s efforts in the transfer window.

The bugs have been exterminated, the engine is purring and the Prediction League is back for the 2018/19 season.

It’s very simple. Leave your predictions in the comment section below using the boxes provided.

You’ll be awarded 2 points for predicting the correct outcome (e.g. win, draw or loss for Wolves) and a bonus point if your score is correct too.

You can then comment in every subsequent preview for the remainder of the season and points will be tracked in an ongoing table.

I’ll be taking part in the fun this season, so you can read my prediction for the game in the comment section below.